It’s quite possible you’ve all seen one of the most fun kinds of effects in film and television, and not even realized it. I’m talking about the Texas Switch. It’s all about making it look like a main actor has done some elaborate stunt on their own, whereas in fact a clever ‘invisible’ switch involving a stunt double has occurred while the camera is still rolling.

The central tenet of the Texas Switch tends to be that it has to be an in-camera effect, with the switch happening as one actor goes behind a wall, pillar or something similar, and the other actor then emerging – seamlessly – to continue the shot. Check out this scene, for example, in The Place Beyond the Pines, which sees Ryan Gosling switch with a stunt motorcyclist mid-scene. There’s also Texas Switch shots in Atomic Blonde, Daredevil, and Baby Driver (look closely as Baby drives into the parking spot right at the end of that Baby Driver clip).

Sometimes, though, the Texas Switch does get a little help from visual effects. This occurred recently in James Wan’s Aquaman, during the scene in which Mera (Amber Heard) is pursued along the Sicilian rooftops in one of several ‘oners’. In the Texas Switch shot, she comes under heavy fire from her pursuers (portrayed by one stunt double running along the rooftop set), and then suddenly changes direction (via another stunt double rigged on a separate line).

“As the camera passes out the window in that shot from the interior and picks up on Mera,” says Simmonds, “we track along with her as she dodges exploding masonry from the Atlantean soldier’s volley of shots. In some cases we replaced the stunt double’s face with plate elements of Amber Heard, other times with a full CG face, depending on performance and lighting conditions.” 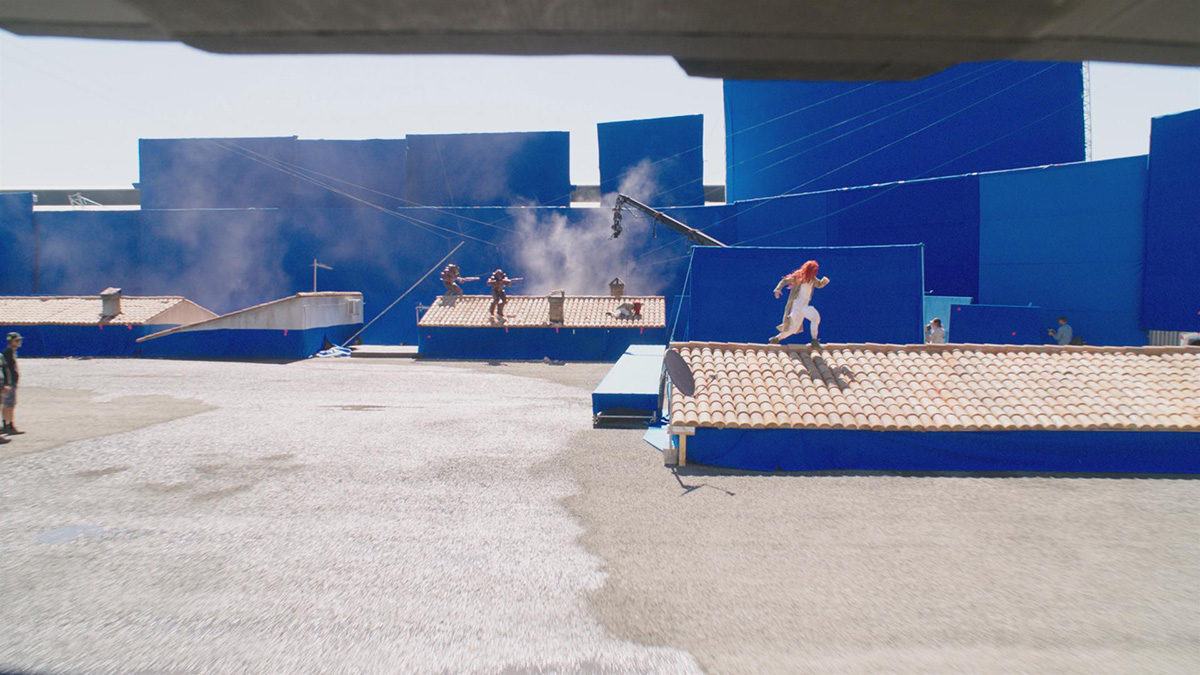 In this bluescreen plate, you can see both Mera doubles in the frame as the scene played out. 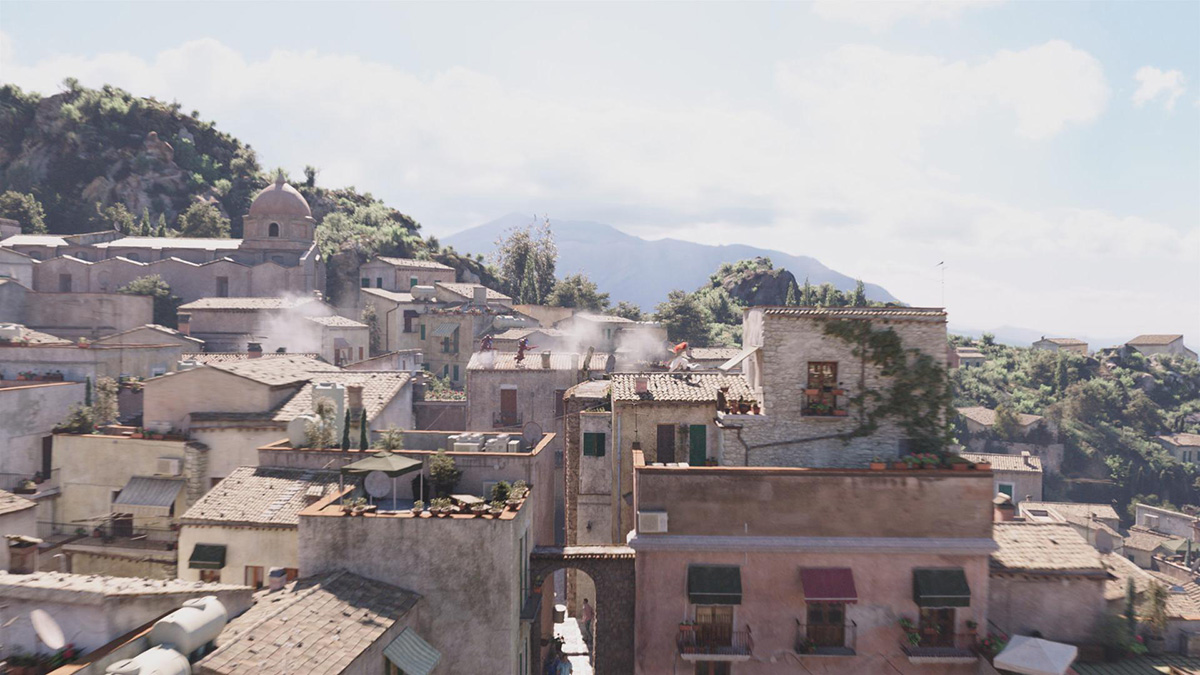 The final shot, which by this point has zoomed back out, with visual effects by Method Studios.

Then the Texas Switch side of the shot came into play. The wire stunt rig which the first stunt double was attached to was designed to go in a straight line, while Mera’s performance required her to make a 90 degree turn onto a parapet to evade the Atlantean troops. “Thanks to a conveniently placed chimney stack, which of course gets blown up by a hydropulse blast,” notes Simmonds, “we could switch from this tracking shot into a separate take of Mera running towards camera. Our camera choreography was freed up somewhat by the full CG background village which allowed us a degree of flexibility in the overlaps between camera takes.”

The result (which Wan actually breaks down in the video below) is a seamless one-take that maintains the freneticism of the sequence. For Method Studios, the toughest part of pulling it off was, says Simmonds, the sheer duration of the shot. “While there were extensive modular set pieces, this shot had a lot of custom asset requirements, especially given how much scrutiny they’d be under.”

“James Wan was also keen to avoid obscuring Mera as much as possible to not give the game away,” adds Simmonds, “so quite a few of the Hydropulse blasts had to be scaled back or timed so as not to lose Mera at any point except when we really needed to. As is often the case finding the sweet spot in performance for the cut point is always the foundation of these kind of effects – even one frame difference can make or break the illusion.”

The (second) bus that wouldn’t slow down

In Jan de Bont’s Speed, most people will remember the bus that is mostly driven by Sandra Bullock which jumps a freeway gap and eventually circles LAX, before blowing up. But there’s another bus earlier in the movie that also explodes – the one rigged by the bomber (Dennis Hopper) to get the attention of Keanu Reeves’ character.

The first bus you see isn’t the one that gets blown up.

Its destruction is shown in a one-take that also made use of an in-camera Texas Switch, as Speed special effects supervisor John Frazier relayed to befores & afters.

“We were right across the street from the Firehouse coffee shop that used to be a fire station in Venice Beach, and Jan says, ‘I want to do the blow up without a cut. I want to do a Texas Switch.’ And he said, ‘The real bus is going to make a left-hand turn right here, and the phoney bus, the bus loaded with the bombs is just going to go straight. And when it gets across the intersection, you’re going to blow it up.’

That’s exactly how the shot was played out; the first bus made the left-hand turn while the bus filled with explosives was towed by a vehicle just ahead of it. On cue, the pyrotechnics were detonated and the shot became a Texas Switch stunt.

Frazier also happened to be involved in another Texas Switch shot several years after Speed with Robert Zemeckis’ Cast Away. It’s the scene where Tom Hanks’ character first tries to escape the island he has been marooned on using a make-shift raft, but can’t get past the reef breakers. At one point he actually gets slammed by a wave and dragged onto some sharp coral, piercing his leg. The camera follows along the leg and coral right onto Hanks’ grimacing face underwater.

“For that shot,” recounts Frazier, “Bob Zemeckis even said, ‘We’re going to do a Texas Switch here!’ So, we had the prosthetic leg with the big cut in it, and then we had Tom waiting. In other words, you saw it happen, but then you didn’t see it happen. When the coral hit Tom’s leg, it was of course just a dummy leg. But what sells it is Tom really showing that pain.”

The digital Texas Switch – is that a thing?

Texas Switch fans would no doubt query whether a shot can be a Texas Switch if there is any digital augmentation; indeed some of the most fun switches are completely in-camera. But there certainly are plenty of examples of Texas Switch-like shots made possible with digital techniques. Oftentimes an extensive stunt will involve a live-action double or actor being seamlessly blended into a digi-double.

A classic example of this is the scene of Orlando Bloom as Legolas in The Two Towers elaborately gripping onto a horse as it strides past him, a shot made possible by Weta Digital. Sometimes a dummy will be used to enable the blend between real actor and the necessary stunt, as in the shot of Brad Pitt being slammed by a van and car in Meet Joe Black, orchestrated by ILM and recently profiled at befores & afters.

The Sicily sequence in Aquaman, too, made use of digital character switches and stitches, thanks to visual effects from Method Studios. This was the case in particular for the direct fight between Mera and the three Atlantean soldiers (watch it at 1.22 in the video below).

“This was a shot that on the surface looked quite straightforward,” notes Method’s Josh Simmonds. “The Avid postvis edit had stitched two takes of the fight scene using an orbital tracking move which covered more than 360 degrees; when Mera flips her legs up onto a soldiers neck to pull him to the ground, it cut from one take to another in a fairly seamless fashion. While there was a bit of a jump, the foreground action worked pretty well. The problem was, once we pieced the choreography and geography of the scene together, we discovered that the action in the second plate was happening about a meter away from the first plate, and the whole background jumped about 20 degrees.”

To deal with the issue, Method Studios decided to use the Avid edit as a guide and then tweak the shot so that the geography would play out correctly. “Once we had full camera match for both takes,” says Simmonds, “we managed to blend the cameras over a couple of seconds and get the foreground soldier to sidestep in to the correct position across the blend so he matched both the outgoing and incoming performance takes.”

B-roll footage from the fight.

“We then used this soldier as our Texas Switch for the tiny moment when he obscured most of Mera. This did require the shot to be basically full CG for this 40 or so frames, but with a combination of good assets, set projections and some clever compositing, it ended up pretty seamless!”

Can you think of other clever Texas Switch shots, either in-camera or made with the help of VFX? Let me know in the comments, below. 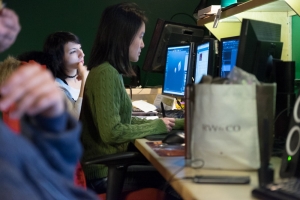